Saw them in Orlando last night, below is a set list.

Got to venue for last song of opening band, no opinion on them as I didn’t really get to listen to them. Venue was an old-time theater that had the seats removed, so there was also an upstairs balcony and a high stage etc. I’d guess the venue was about 20% full (if that) at it’s highest point. There was a lot of room to move around. Not sure if it was because this was a Tues or the door price ($30 but when bought online was closer to $50), if because this is not a venue that typically has alternative bands, show was not promoted or what. It was nice to be able to move around freely, but have to wonder if everyone who would have gone was made aware. I myself drove from 2 hours away. Anyway, I was surprised about the turn out, hopefully it didn’t impact Swervedriver (I bought a shit ton of merch myself)

Was fairly easy to get up front for Swervedriver, so I stood directly in front of Adam and his Vox amp. I think that I most likely could have heard a more even mix standing slightly farther back, but I didn’t want to hear the songs played evenly/mixed perfect like the LPs, I wanted to feel the guitar lines ear-fuck me and every time Adam mashed on a pedal, my ears felt it and it was great! As you can see, the set list heavily favored their brand new LP which makes perfect sense as this tour I’m sure was predicated on them letting fans know they had a new record out. The band came out and just started the rock. Adam made a quick comment about Dick Dale passing before he surf-guitar slid into “99th dream”, then made another comment after another song, but didn’t really speak or address the crowd or talk about the new release songs etc. I didn’t know if that is just his stage persona or if they were on a strict time line. So when the band started up with “Duel” I got nervous because I thought “Oh fuck, I hope this doesn’t mean this is the last song” but sure enough it was, the last notes rang out and the band was off the stage, obviously too early for me, but well worth the price to get in. One thing that I don’t get (or ever get) is that there was a 30m+ wait time for the next band after all gear had been broken down/set up. I get a band decides what a good amount of songs is, but why not just push back the start time so that there is like 15m cause just sitting there thinking about the songs that could have gotten played is a bit sad. Anyway, I was super stoked that the tour came to Florida, hearing the new songs fleshed out and live and powerful was great (“Future Ruins” and “Good Times” sounded better/fuller/thicker than on the LP) and I hope that I’m fortunate enough to see Swervedriver live again.

I only heard the first song of Failure and wasn’t feeling it, so left. It was interesting though as just based on merch people had in their hands and the snippets of conversations overheard, it seemed like there were people just as passionate and excited to see Failure as I was too see Swervedriver, which just baffles me.

Oh, I also spoke with someone who said they flew from Miami to New Orleans and then came down to Orlando just too see Swervedriver, a true fan! 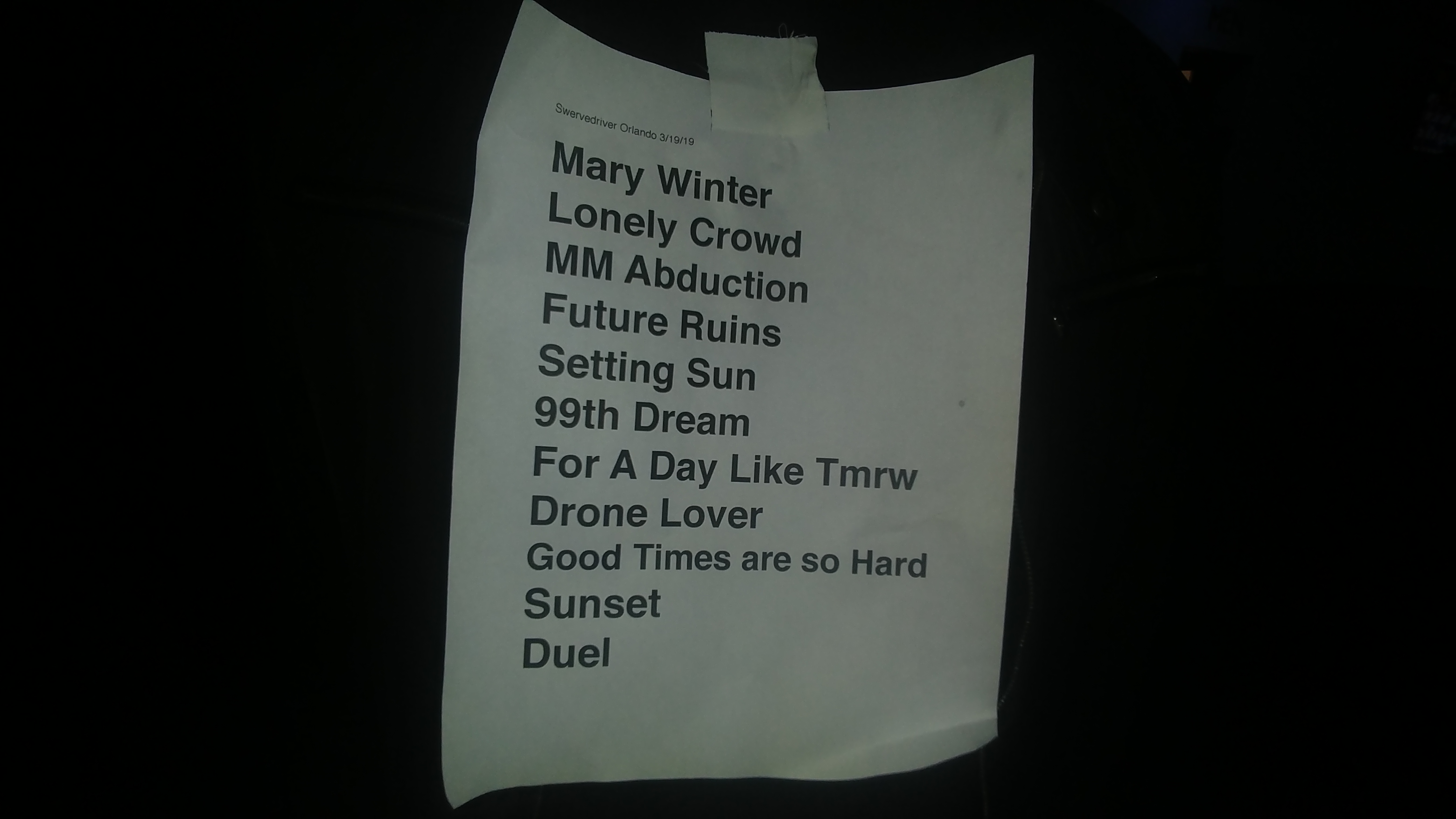 We use cookies to ensure that we give you the best experience on our website. If you continue to use this site we will assume that you are swervie with it.Ok